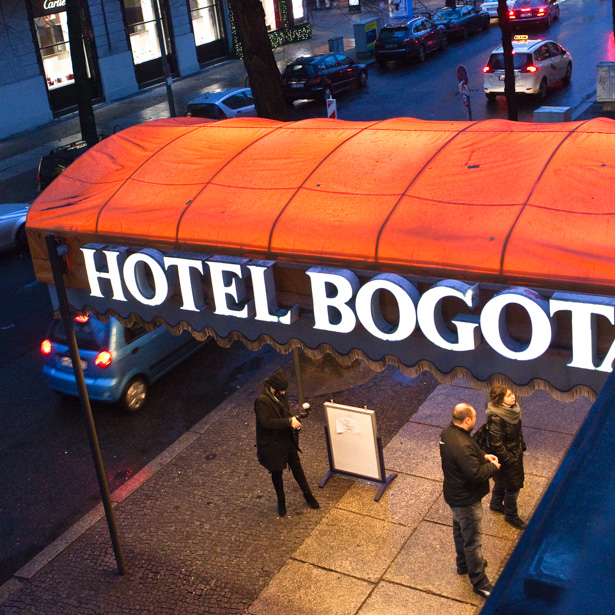 It was one of Berlins most flamboyant places of culture and photography: The Hotel Bogotá. Once in 1911 constructed as a grand bourgeois living house in Schlüter Street 45 it paßed through a changeful history. The domicile of the up-coming and culturally ambituous bourgeoisie in the New West City quickly changed to a meeting place of Berlins artist scene.

About 100 years later it became such place again, but this time with reversed premises: End of 2013 farewell was celebrated by a series of arts exhibitions, events and finally auction of all furniture. An era formed by arts, especially by photography and film comes to an end for Hotel Bogotá.

The photos of the following gallery give an impression of this leave-taking. The "Kleister-Aktion" (Paste-Event) turned a complete floor into an exhibition: Berlin photographers pasted their pictures at the walls of all hotel rooms. The gallery photos should give a feeling for the atmosphere of the place and for the spirit of the photo community, one more time spreading out in the semi-evacuated rooms.

Flashback: What has turned Hotel Bogotá into such a legend?

To begin with, one of the first and probably most famous tenants was the jewish fashion photographer Else-Ernestine Neuländer, better known by her artists name Yva. One of her apprentices was the talented Helmut Neustädter, who emigrated to the United States and later became world-famous under his new name Helmut Newton. Yva could resist to the reprisals of the Nazis for a long time, but finally had to close her studio in 1938. She was expropriated, condemned to forced labour and murdered in the extermination camp Sobibór in 1942.

The building in Schlüterstreet cynically from 1942 became residence of the Filmkammer (Camber of Movies), a department of the Reichskulturkammer (Camber of Culture of the Reich). At that time the breakfast room of later Hotel Bogotá was used as a projections room, where Joseph Goebbels and other Nazi officials used to censor movies and to streamline them to their propaganda.

This place of censorship immediately after the war became a place of the democratic change in cultural life: The "Cultural Aßociation for Democratic Renewal of Germany", founded in Berlins east sector, moved in to Schlüterstraße in 1945. And right there also the Camber for Denazification of artists and media representatives of the Nazi regime started working, directed by the British occupation authorities. After using as residence of the German Trade Unions between 1952 and 1964 the building became a hotel finally. Its new proprietor, who escaped to Columbia from the Nazis and had returned now, called it Hotel Bogotá in memory of his exile living place.

Steffen Rißmann took over the place in 1976, and managed by Alexandra and Joachim Rißmann in second generation until 2013, it became an artists domicile again. Helmut Newton among others used to stay here. The hotel offered rooms at decent prices, just some meters off Ku’damms hectic milling crowd. It offered space for artistic discourse and became an exhibition place for photography.

During recent years, however, rents in today's City West have been forced up by estate agents that far, impoßible to be made by a hotel busineß of that kind any longer. After an action for eviction the historic place is being reconstructed extravagantly, turned into an "office building with flair" and profitably commercialized.