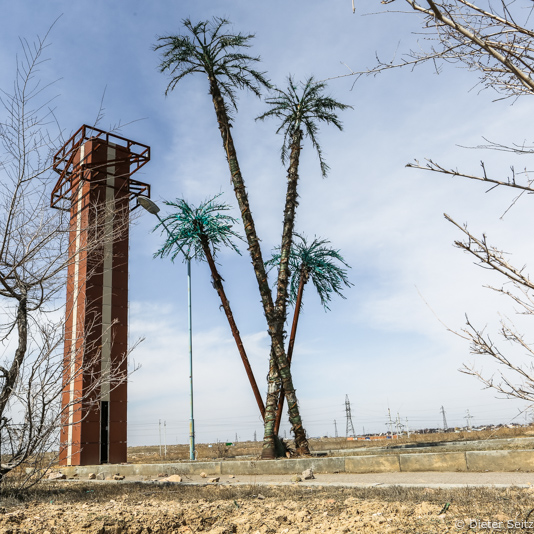 The series Kaz Vegas documents Kazakhstans gambling scenery in 2014/2015, seven years after the decision to create "A New Las Vegas in the steppes". The series is telling the story of reorganizing the gambling industry of the country: We see sites in different stages, right at the edge of the steppes; portraits showing casino duty, acting in highly formalized order, hierarchies and aesthetic rules; fassades and faces representing forms of enacting illusion.

Recovering from the crisis after mid 1990s the money of privatization and oil business created a gambling boom all over Kazakhstan. On the background of a growing gap between the poor and the rich the mushrooming casinos as highly visible symbols of new capitalism served a provocation.

Thus a governmental decree restricted gambling in two provincial cities - in order of better control, the casino business should be isolated from residential neighbourhoods and should create new tourist centres.

The way from unbridled growth to an attempt of harnessing worst excesses by governmental regulation - and at the same time developing gambling to the benefit of the country, this way seems to be symbolic for Kazakhstans development in general.

Kaz Vegas is part of The Kazakhstan Project, started in 2009.